Lettings market activity has rebounded in the four weeks since the property market re-opened on 13 May, according to Knight Frank.

Restrictions on UK property transactions were lifted on 13 May following an eight-week period during which physical viewings ground to a halt and demand remained muted due to the Covid-19 global pandemic. As the UK emerges from lockdown and the wider impact on the jobs market becomes clearer, this will have a bearing on the performance of property markets.

The lettings market has rebounded more quickly than the sales market since restrictions were lifted. The number of viewings last week was 1% higher than the five-year average despite the fact social distancing rules remain in place. The equivalent figure for the sales market in London was -26%. Meanwhile, web views for lettings properties last week were 33% higher than the five year average compared to a 12% decline for sales.

Despite the increase, activity levels in the lettings market haven’t returned to where they were during the second half of 2019 when demand was boosted by uncertainty in the sales market due to Brexit-related political volatility. The three highest weeks on record for new prospective tenants registering were all in September last year.

“We expect demand to get even stronger when there is more certainty around how universities will be teaching their courses next year,” said Jon Reynolds, head of lettings at Knight Frank for the City, east and Riverside region in London. “Those announcements will make a huge difference and demand will be bolstered further as companies reactivate relocation plans that are currently on hold.” 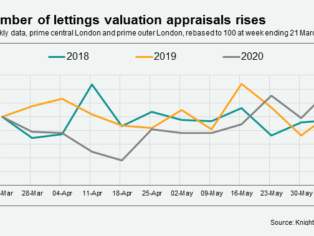