We know alarms are the most cost-effective means of fire safety for the average population because it gets them to flee the building. But so many of the population are not average, writes Yusuf Muhammad co-founder and chief design officer at Plumis.

Fire safety challenges are constantly changing. Alongside developments in building construction and legislation, changes in population have a significant impact on the nature of fire risks and therefore the most suitable safety measures.

Research has shown that elderly and vulnerable residents are the groups most at risk from serious injury or death from domestic fires, whilst a recent briefing paper by The Building Research Establishment has highlighted the need for more sophisticated protection measures.

The paper emphasises that the elderly and those suffering from conditions such as dementia, need a more sophisticated solution than alarms. Reporting that the combination of frailty caused by age, and mental and physical disability lead to a slower response time to fire and challenges leaving a property. For this population it is unrealistic to expect that the installation of a traditional fire alarm system is enough to save lives. Social landlords face a significant challenge, as they house a large number of vulnerable residents. The English Housing Survey 2016 states that of the 3.9 million households in the social housing sector, 49 per cent of households have at least one member with a long-term illness or disability.

Similarly, Scottish government figures show that 27 per cent of social housing tenants are classed as single pensioners or in households with at least one pensioner. Around 45 per cent of adults in both local authority and housing association properties report a disability, a much higher figure than the owner occupier population.These vulnerable groups need a solution that not only warns of fire but acts to tackle it at the earliest possible time.

Water mist technology is a viable sprinkler-alternative for active fire protection and can be easier and more cost effective to retrofit as water mist systems tend to use less water than traditional sprinklers, and some can be connected to the existing domestic water supply.

Our own system, Automist is connected to multi sensor detectors and is electronically triggered, helping to improve detection and activation times. The spray heads feature infrared sensors which when triggered scan the room to identify and locate a fire, before targeting it with a dense fog of water mist.

Many social landlords are already retrofitting water mist systems to protect their vulnerable tenants. In February 2020, work started on retrofitting Automist Smartscan into eleven sheltered housing schemes in south London. The aim of the project was to increase fire protection for some of the council’s most vulnerable residents, with minimal disruption during installation.

Since the installation, there have been two activations reported. On both occasions, the residents were made aware of a fire starting due to Automist raising the alarm and the systems spray heads scanning the room to detect any heat changes that would indicate a fire was present. During this process, the system can identify heat changes that indicate different types of fires and records the temperatures and temperature changes to its internal memory, providing a clear timeline and overview of events.

In both cases, upon hearing the alarm the residents extinguished the fires themselves and so the system found no significant fire present, resulting in the system automatically returning to standby – resulting in no unnecessary water damage. If, however, the system had identified any heat changes resembling a life-threatening fire the system would have targeted the fire with a dense fog of water mist.

Water mist removes heat and displaces oxygen from the fire zone, resulting in fire control, suppression or extinguishment. The intention is to lower the temperature, lessen the radiative heat and reduce the oxygen concentration to such an extent that combustion can no longer be maintained.

In addition to this, water mist uses significantly less water than traditional sprinklers. Our system for example uses just a tenth of the water, minimising consequential water damage, reducing the time required and cost of remedial work should the system be explored. We’re also currently exploring the impact this could have on insurance premiums and working on creating a tool to assess the lifetime value of the system in comparison to traditional approaches.

Whilst the system was not required to deploy water mist to suppress the fire, a report was supplied to the social landlord enabling them to make an informed assessment of what had happened and identify whether any additional precautions or interventions were needed to mitigate any further risk. This was particularly important as the details of what had happened for one of the incidents was unclear. The data collected by the system was able to provide the landlord with a more accurate account.

The data log showed that upon triggering of the smoke detector, the paired Hydra head initiated the programmed scanning routine. Scanning a 130 degrees arc, a heat source was detected by the embedded Infrared (IR) sensor, centred at an angle of 45 degrees from the left-hand-side origin (figure 1), which was the location of the residents’ ashtray.

To determine the presence of a slowly developing fire, the system analyses the IR sensor feedback through the application of a Modified Gradient Algorithm (MGA). The MGA then compares six consecutive scans and if the condition is met where the six consecutive scans record a temperature rise relative to the previous then the system will activate, independent of the absolute temperature reading. The analysis of the data log for this incident showed that the maximum number of consecutive temperature increases was two scans (see figure 2). This incident did not, therefore, meet the activation criteria.

Using fire mist technology in a social housing setting can provide many benefits including giving vulnerable tenants additional time to escape or be rescued, or as demonstrated with this incident time to respond and act accordingly.

Social landlords have a responsibility to protect tenants and need to be particularly aware of the factors that make a vulnerable population at increased risk of death and injury in a fire. Existing fire mist technology can offer the additional protection that the sector needs, whilst also providing additional information to further mitigate any fire risk. This will become increasingly important as an ageing population means that these challenges are only going to increase. 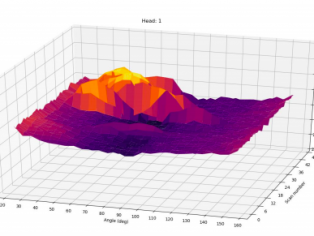