Stockport committed to a greener future

In a first for the council, the two developments were built by Three Sixty, an innovative profit-for-purpose construction and property management firm contracted by Viaduct Partnerships – the development partnership between Stockport Homes Group and Stockport Council.

The properties include air source heat pumps to supply year-long renewable energy to the houses – another first for social housing in the borough.

The air source heat pumps use efficient technology to generate renewable energy for the homes throughout the year, adapting to the outdoor climate and working in conditions down to -20 degrees.

The low carbon approach not only works within the council’s ‘Homes as Energy Systems’ project, but also helps save money at a time when traditional heating systems are becoming increasingly expensive.

Councillors from Stockport Council and members of the Stockport Homes Group board and leadership team alongside staff from Three Sixty and the project team who had worked on the development.

Three Sixty were contracted by Viaduct Partnership to build the two new properties in order to grow the social housing stock available in the region in a sustainable manner. Formed in 2016 as part of Stockport Homes Group, Three Sixty works throughout Greater Manchester, and the new build houses in Cheadle represent a significant milestone in the company’s growth.

The Holly Avenue development is the first full-service construction by Three Sixty, with the company marking its ongoing commitment to environmentalism and social impact at the event.

“The significance of the Holly Avenue developments can’t be overstated.

Turning an unused garage into a space where two families can live in a thriving community setting is extremely rewarding, and to be doing so in an environmentally friendly way makes everyone who’s worked on this project especially proud.”

Chair of the board of Three Sixty, David Wright said:

“We’re delighted to mark the completion of the first new build properties and look forward to Three Sixty’s continued growth.

Three Sixty is committed to creating a positive social impact and we’ll continue to deliver excellent work on social developments such as these as well as other commercial enterprises.”

Homes England provided a grant of £126,000 towards the development scheme. 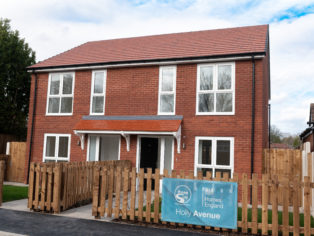