Housing association Salix Homes has once again been hailed as one of the top landlords in the North of England in recognition of its commitment to building safety.

The Salford-based social housing provider, which owns 8,000 homes, is one of just five organisations shortlisted in the Best Approach to Building Safety category of the Northern Housing Awards.

The judges were impressed with Salix Homes’ approach to building and fire safety, which has also seen the landlord commended by Dame Judith Hackitt, who led the Government’s Independent Review of Building Regulations and Fire Safety following the Grenfell Tower Tragedy in 2017.

Salix Homes has completed its cladding remediation and safety enhancement programme across its high-rise blocks in Salford, which has included the removal and replacement of defective cladding systems, new state-of-the art fire alarms and the installation of sprinklers to some buildings.

The housing association has also been playing a key role in championing building safety behavioural change programmes across the housing sector, having worked alongside Government bodies to support and advise on the development of the national Building A Safer Future Charter and the consultation process on the Government’s draft Building Safety Bill.

“The safety and wellbeing of our residents is the utmost priority for Salix Homes. Following the Grenfell Tower tragedy, we acted swiftly to enhance safety measures across all our high-rise buildings and work with Government bodies to raise the bar on building safety on a national level, so to be recognised in the Northern Housing Awards is a real testament to our efforts to put building safety first.”

Salix Homes’ flagship Poets development in Swinton was also shortlisted in the Regeneration Scheme of the Year category of the Northern Housing Awards.

The multi-million-pound regeneration scheme has seen 146 defective properties, that were affected by structural issues, demolished, and replaced with 160 brand new homes.

“It’s double the celebration for Salix Homes in this year’s Northern Housing Awards, and we’re delighted to see our work to make a difference to the lives of people and communities in Salford recognised in such prestigious sector awards.

“At a time when social and affordable housing is in such short supply, our Poets development has delivered 160 much-needed new homes and helped breathe new life into the community.

“We’re also incredibly proud of the work we have done and continue to do around building and fire safety. Our actions to drive forward fundamental reforms in the built environment will help ensure people’s safety is always put first in the planning, designing, building, refurbishment and maintenance of high-rise buildings on a national scale.”

It’s not the first time Salix Homes has been recognised for its commitment to building safety, having previously been shortlisted in the Chartered Institute of Housing Northern Awards.

The winners of the Northern Housing Awards will be announced on May 17.

It’s been a busy month of industry accolades for Salix Homes, with its Artifex development also shortlisted in three categories of the Tall Buildings Awards, which recognise the best design and construction of tall buildings across the UK.

The winners of the Tall Building Awards will be announced in June. 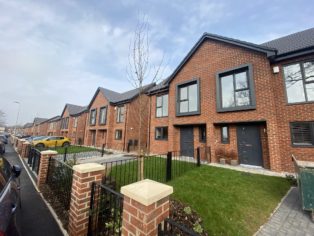