Aico’s Fearsome Fundraising for the EIC

This Halloween, Aico colleagues organised a spooky fundraising day to support the Electrical Industries Charity (EIC). Aico colleagues donned a variety of spooky and imaginative costumes, from trolls and monsters to butterflies, pirates and witches, and took part in themed activities such as a pumpkin carving competition, where each team collaborated to design the most creative pumpkin! Aico’s Technical team were crowned the winners with their ‘Pumpkin Spiced Latte’ design, but the Product Development team were a close second with their latest innovation, PumpLINK – a pumpkin that detects whether your home is at high-risk of ghosts, ghouls and spooky surprises!

As long-standing charity partners of the EIC, Aico raised over £300 in aid of the charity and the essential support they provide to the electrical sector.

The EIC provides practical support and financial relief to people and their families within the electrical and energy industry. They assist in many areas including poverty, homelessness and mental health support. The charity provides well-being solutions that transforms lives.

Corporate Social Responsibility is part of Aico’s core ethos and the company regularly holds fundraising days for colleagues at their HQ, in aid of various local and national charities and organisations.

“It was fantastic to see so many colleagues make the effort and take part in our Halloween Office Fundraising Day in support of the EIC. Being able to raise money for a charity that is there to support all of us within the electrical industry is really important to us. It was such a fun day with great team work and creativity shown by all”.

Imogen Bickford, Internal Sales Advisor for Aico who dressed up as Mike Wazowski from the well-known film Monsters Inc said:

“For my first Halloween at Aico, the Internal Sales department dressed up as characters from Monsters Inc, which was also the theme for our pumpkins. It was great to see everybody taking part in dressing up and the pumpkin carving competition whilst giving back to the community and supporting the EIC. It’s fantastic that we can come together as a company to raise money for such good causes.”

Find out more about the EIC by visiting https://www.electricalcharity.org/ 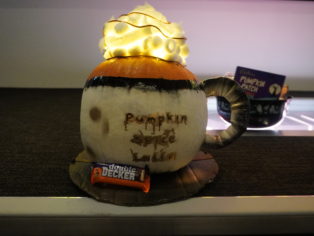