The ethics of energy distribution

Paul Hutchens is CEO of Midlands-based solar specialists Eco2Solar. He is a board member of the Solar Trade Association (STA), the UK’s leading solar industry voice, and Chairman of the STA’s New Build Working Group which aims to inform governments, councils, house builders and consumers about sustainability in housing. Here, Paul discusses some of the ethical issues surrounding energy distribution in the UK, the rights to energy access, and how the growth in bi-directional energy presents challenges to current distribution models.

The energy market is in a state of change. Technological, economic, environmental, and political developments are all having an unprecedented influence on how the UK considers, consumes and stores energy. There are well publicised issues around how and where energy is produced, but the distribution of this energy is a subject that raises more questions. Is access to energy a basic human right? What are the ethical implications of storing and sharing energy? And who should be making decisions on what we buy and what we share?

Can energy generation and distribution ever be ethical?

Renewable energy generating solutions like solar, wind and geothermal are gathering pace across the globe. However, the development of these technologies often requires government subsidies and incentives, which can raise questions of freedom, fairness, and equality. In simple terms not all communities have the freedom to choose renewable energy solutions.

In her paper ‘Is energy an ethical issue?’ Linnea Luppala argues there will always be a trade-off. She notes “Every single energy technology has its negative impacts and energy policy must make difficult decisions between the different choices available”. However, we can claim that renewable energy solutions are more ethically responsible than fossil fuel solutions. Carbon dioxide and methane emissions from burning fossil fuels contribute to global warming and decreased air quality whereas solar energy solutions produce no such pollution. While some argue that emissions are created during the production of solar panels these emissions are much lower compared with lifecycle emissions for coal and natural gas. The so-called ‘hidden emissions’ due to building wind turbines, solar panels or nuclear plants are very low compared with the savings from avoiding fossil fuels.

So where green energy technologies are available, they are certainly more environmentally ethical, but when this energy is produced who decides where it should go and at what cost?

What happens with our surplus energy?

In the UK, with our current centralised energy distribution system, consumers must pay a cost per unit (known as kilowatt hours or kWh) along with the costs associated with the production and distribution; some of which can be included in the kWh unit figures or a separate fixed standing charge. However, recent moves towards decentralisation of energy and bi-directional energy flow represent changes to this traditional one-way model of generator to consumer. Through solar, battery and ‘smart’ technologies consumers and businesses are now able to harness their energy production in a way that they could not do before. We are moving towards a model whereby the consumer can choose when to use, store and – in theory – sell their energy. This turns the current model of distribution upside-down and legislation in the UK and worldwide is having to adapt to fit with these changing arrangements.

The Feed-in Tariffs (FIT) scheme is a government programme designed to promote the uptake of renewable and low-carbon electricity generation technologies. Introduced on 1 April 2010 the scheme requires participating licensed electricity suppliers to make payments to consumers and companies with solar panels on both generation and export from eligible installations. It has now been confirmed that the FIT scheme will be closed to new applicants from 1 April 2019. In November 2018 Claire Perry (Energy Minister) signalled a shift on export tariff plans and declared it was “wrong to provide solar for free”. Furthermore, on 8 January 2019 the Department for Business, Energy and Industrial Strategy published a further consultation on a ‘Smart Export Guarantee’ under which government would legislate for suppliers to remunerate small-scale low-carbon generators for the electricity they export to the grid. However, it looks unlikely that any direct replacement for the FIT or an export tariff will be in place for April 2019 meaning consumers may be giving excess energy back to the grid for free. When businesses and homeowners pay a ‘unit’ charge for any energy they consume, renewable energy producers providing usable energy without recompense is troubling.

One country which has experienced even more controversy in terms of renewable energy models is Spain. The so-called ‘sun tax’ law of 2012 was implemented by the government of Mariano Rajoy in 2012. It has been heavily criticised as it charged Spanish homes fitted with solar panels an additional tax of 7% to remain connected to Spain’s electricity grid should the solar panels not produce enough energy. According to Spanish energy experts, the average family with three solar panels fitted to their home paid around EUR 70 each month to remain connected to the grid. Last October Pedro Sanchez’s government announced that it would scrap the controversial levy making it cheaper for consumers to erect solar panels for their own use. Energy and Environment Minister Teresa Ribera said: “This country is finally freeing itself from the great absurdity, scorned by most international observers, that is the ‘sun tax’”.

Leaving aside the significant issue of fuel poverty for the moment, in the UK and many developed countries, access to electricity is abundant. In many parts of the world, this is not the case.

According to World Bank nearly one billion people – mainly in Sub-Saharan Africa and Asia do not have access to electricity. The United Nations 2012 Sustainable Energy for All initiative (EAI) stated 2.6 billion did not have access to clean cooking energies and it was suggested by International Energy Agency (2011) that universal access to sustainable energy by 2030 will not be achieved unless significant investment is targeted towards energy access provision.

There is significant opportunity to use renewable technologies – such as solar – to bring electricity to rural communities. Kenya is a leading example of a country embracing renewable technologies for economic benefit. The Rural Electrification Authority (REA) in Kenya works with businesses to implement off-grid solar system – they are working towards universal access to electricity by 2020 to help the country achieve financial sustainability. In addition, the Kenyan government is investing heavily in geothermal energy production, and Kenya will also be home to Africa’s largest wind farm – the Lake Turkana Wind Power project in the north west of the country, designed to produce enough energy to power one million homes.

Access to electricity is arguably a fundamental human right and the growth in renewables such as solar is going to be a key factor in ensuring this worldwide access.

So, how do we ensure ethical distribution? We have mentioned renewable technologies introduced on a government level to benefit developing countries. However, in more general terms it could be argued that only the homeowners at the upper end of the social spectrum, and big businesses have the resources to choose renewable technologies. Often the less well-off, and smaller businesses do not have the freedom to make that choice. More renewable technology means more electricity will be taken ‘off grid’. Less than 40% of an energy bill is the wholesale cost of the energy, the remaining 60+% covers network costs, operating costs etc. Fewer consumers on the grid means that those distribution costs will need to be shared by a smaller group. This may mean that the energy bills for the less well-off, who remain dependant on the grid are likely to rise. The fairness of this arrangement is clearly concerning, and there is pressing need to ensure greater equality in both choice and charges.

Energy poverty is a major concern in the UK. The Annual Fuel Poverty Statistics Report from 2018 stated more than one in ten 10 households in England were living in fuel poverty. The government report said more than 2.5 million families were unable to pay the costs associated with heating their homes without falling below the poverty line in 2016 – an increase of 69,000 since 2015. Single-parent households suffered worst with more than a quarter (26.4 per cent) struggling to pay their energy bills. It has been argued that solar could be one of the answers to this fuel poverty crisis. For example, in March 2018 North Ayrshire Council approved a plan to install rooftop solar panels on up to 500 properties. The plans should help residents save up to £115 within the first year – part of the council’s Environmental Sustainability & Climate Change Strategy and its commitment to tackling fuel poverty.

Disappointingly, reference to solar PV has been omitted entirely from the recent Committee on Climate Change report on the future of home energy efficiency. The Solar Trade Association (STA) is pushing for higher national buildings standards and a robust retrofit programme to target homes in fuel poverty. Solar technologies are essential in solving this fuel poverty challenge. STA chief executive Chris Hewett said: “Both solar PV and solar thermal are a natural fit with the decarbonisation of our building stock. They are affordable, popular, proven and easy to maintain. They can also support the performance of other energy-saving technologies as well as the development of the smart grid.”

The future of energy distribution

We are on the cusp of change and decisions on ‘who charges who, and what’ are a matter of significant ongoing discussion. ‘Charging Futures’ is a programme coordinating the reform of electricity access and charging arrangements in collaboration with users of Great Britain’s electricity network. It notes that the energy system is going through a radical transformation which creates challenges and opportunities for electricity networks. One major project for the programme is the ‘Access and forward looking charging reform’ which aims to “ensure that electricity networks can be used more efficiently and flexibly so that users can have the access needed, and benefit from new technologies and services, whilst avoiding unnecessary costs.” The outputs and recommendations from the working groups will be announced mid-2020s.

The ethics of energy distribution are complex, and the possibility of an entirely ethical energy distribution system seems improbable. Nevertheless, consumers and businesses now have more choice than ever in terms of where they get their energy from and the launch of entirely green energy companies (supplying 100% renewable electricity) show a growing market demand for more ethically agreeable suppliers. For example, companies such as Tonik and Solarplicity are proving increasingly popular with the more socially conscious consumer.

The wider ethics of who should decide how and where energy can be sold are still subject of debate. Consumers are becoming producers, producers are becoming consumers – the term “prosumer” has been used to describe these people – and the ethics of who should ultimately benefit from these changing models looks unlikely to be solved in the immediate future. In the meantime, the move to decentralisation continues apace and technologies such as solar look likely to remain fundamental to this energy revolution. 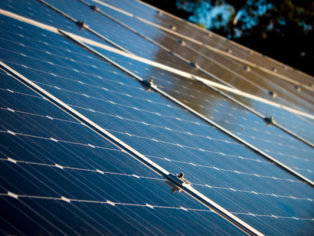