One of the most significant outcomes of the Grenfell Tower inquiry phase one report has been the chairman’s demand to end the automatic ‘stay put’ policy for all high-rise blocks.

Sir Martin Moore-Bick told Ministers to develop national guidelines for the total or partial evacuation of towers and to make it illegal for owners and managers of high-rise buildings not to draw up such evacuation plans. He also wants urgent inspections of fire doors in all multi-occupancy, residential properties and regular inspections at least every three months thereafter.

The Government said it was considering all of the report’s proposals and it announced a cross-departmental steering group to review ‘stay put’ policies and to assess what to do if evacuation was needed.

Sir Martin said people died at Grenfell because the ‘stay put’ policy was not lifted earlier. He added that the concept had “become an article of faith within the London Fire Brigade so powerful that to depart from it was … unthinkable”.

The policy is heavily dependent on compartmentation working (it is meant to give at least one hour’s protection from the spread of fire) and when that failed, he said an evacuation should have been implemented. Tragically there was no contingency plan for the evacuation of Grenfell.

He was scathing in his criticism of London Fire Brigade commissioner, Dany Cotton, who said in her evidence: “It’s all very well saying ‘get everybody out’, but then how do you get them all out?” Sir Martin said this demonstrated that the LFB had never sought to answer that question.

Evacuation guidelines
Although senior members of the LFB had seen a presentation on high-rise fires in different places around the world, experienced commanders had no training in the dangers of combustible cladding. In addition the risk database for the building “contained almost no information of any use” and the information it did contain dated from 2009, some five years before the refurbishment started.

Sir Martin said the new guidelines should include ways to protect fire exit routes and procedures for evacuating people who are unable to use the stairs or may require assistance, such as disabled people, older people and young children. This should include personal emergency evacuation plans prepared for all residents with reduced mobility or cognition.

He also said all tower blocks should be fitted with speakers or sirens to alert residents to get out and fire brigades should undergo training for evacuations. The London fire brigade said it had not carried out an evacuation drill on any residential tower since Grenfell.

Fire experts question the suitability of immediate evacuation in tower blocks with a single-staircase and where resources do not exist to provide rescue lifts or other vital equipment to assist with moving otherwise immobile people. At Grenfell some firefighters had to lend their breathing apparatus kits to the residents because they did not have specialist evacuation equipment such as smoke hoods. 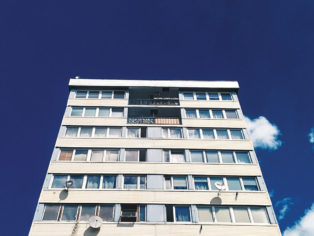