Thousands of window restrictors installed in health facilities across the UK may not be giving the level of protection required and as a result could be falling foul of their duty to keep patients safe.

Newstar Door Controls, innovators of the Cubelock range of window restrictors, is raising awareness of these inadequacies and sending the message to estate and facilities managers who may be unsure of the guidelines.

“The Department of Health, Estate and Facilities Alert EFA/2013/002 is now more than five years old,” says Toby Staff, Managing Director of Newstar Door Controls. “Despite this, we still see specifications for window restrictors coming through with nothing more than the BS Standard.

“As recently as January 2019, there was a reported incident at Medway Maritime Hospital where a man suffered serious injuries after falling from a ward window.

“The hospital confirmed that a patient fell from a ledge after forcing a window open and climbing out. It’s believed that he suffered a fractured skull, hip and jaw from the 20 feet drop.

“This is obviously cause for great concern. BS EN 13126-5:2011, the test for window restrictors, was singled out as inadequate by DoH for two issues.

“Firstly, testing to 500N is inadequate in preventing a determined effort to force a window open beyond the 100mm restriction. And secondly, that locked restrictors can be opened with commonly available flat bladed instruments as well as the ‘key’ provided.

“The function of the Department of Health, Estate and Facilities Alert (EFA) is to communicate safety and potential risks in the healthcare environment. We believe that the message hasn’t got through to the estate and facilities managers and that they are unwittingly not using the guidelines.

“It is especially important where there are at risk patients, specifically in mental health facilities where patients may be in a confused mental state.

“To combat the first issue, while the EFA doesn’t define what is substantial or robust, it singled out that BS EN 13126-5:2011 which tests forced opening to a maximum of 500N, was inadequate. The EFA recommends the potential use of a second window restrictor.

Above and beyond the standard

“To assist estate and facilities managers, we retested our products and confirm that when our keyed window restrictor is used in tandem with our non-keyed fixed version, a maximum holding force of 5250N is achieved, 10 times more than what is required in the standard.

“The second problem of keyed restrictors opening with common flat bladed instruments, such as a knife or screwdriver, which break the locking mechanism, we have addressed in two ways.

“Our key is designed with three teeth, which means it cannot be opened using another instrument, and if for any reason the lock fails – it will fail in the locked position. Which means for new facilities, or where new windows are being installed, there is a single solution that has been tested to adhere to the higher demands.

Getting the message out

“There’s no reason why any new windows should be installed without adequate window restrictors fitted. It’s five years since the extra information was published, and products are available, including Cubelock fixed restrictors, to prevent this from happening.

“We believe that people installing the windows have not been made aware of the DOH alert and, if given the information, they will fit window restrictors that have been shown to outperform BS EN 13126.”

Find out more about the Cubelock range of products and request a catalogue. 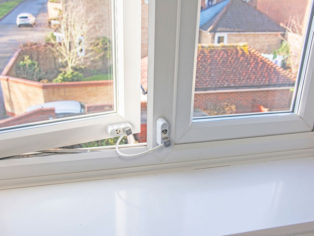