James King of FireAngel shares his top tips with private and social housing landlords on installing the most appropriate levels of fire and carbon monoxide (CO) protection throughout rental properties.

Recent National Housing Federation research has shown that housing associations throughout Britain currently provide more than 2.5 million homes for over five million tenants. Back in 2014, more than two million private landlords also let over five million properties, a figure that will have undoubtedly have increased over the last three years.

These statistics evidence that an increasing proportion of the UK’s population are living in either private or socially rented accommodation. However, did you know that these individuals are seven times more likely to have a fire than those who own their home? For landlords, ensuring the safety of their tenants, specifically with regards to fire and CO safety, is more paramount than ever. According to a recent report compiled by Property Wire, over half of UK private landlords have conducted fire safety checks throughout their property portfolio in response to the Grenfell Tower disasters.

The correct fire and CO protection required for each rental property can initially appear a confusing and complicated process. However, by following these simple steps, landlords can not only follow best practice, but also provide tenants with the most appropriate levels of protection.

Tip one: Understand your legislation

In order to achieve compliance with relevant legislations, landlords must first understand the specific regulations that apply to themselves and their properties. UK fire safety regulations are predominantly dependant on two factors. Firstly, the type of property being rented, and secondly, its location. With regards to legislation in England specifically, it is recommended that all private landlords should refer to the Smoke and Carbon Monoxide Alarm (England) Regulations 2015, as fire safety legislation is enacted differently under the three jurisdictions of England & Wales, Scotland and Northern Ireland.

The Housing Act 2004 applies to all residential properties including Houses in Multiple Occupation (HMO). A HMO is a property that is shared by three or more tenants who are not members of the same family. The act is enforced by the Local Housing Authority, which in most cases will be the Local Council Housing Department. However other pieces of fire safety legislation can be applied to HMO’s.

UK Fire Building Regulations are based on a range of different documents and outline varying levels of protection. BS 5839-6 is a useful resource for understanding the recommended fire detection in domestic premises as it summarises the code of practice for the design, installation, commission and maintenance of fire detection and alarm systems. Landlords must research these regulations carefully to ensure they install the appropriate types of protection required.

All landlords, whether private or social, should have an in-depth understanding of the Fire Safety Order (FSO). The legislation states that there must be a listed ‘responsible person’ who not only complies with all relevant legislations, but also conducts fire risk assessments. If there is no employer, the responsible person is the individual who has control of the premises, which is often the landlord with regards to rental accommodation.

When conducting fire risk assessments, it is recommended that landlords follow the fire risk assessment template provided by Gov.uk. However, they should also be aware of their duties in relation to local housing authorities under the Housing Act 2004, while also being compliant with the property’s local fire and rescue service, as per the Regulatory Reform (Fire Safety) Order 2005. It is also recommended that individuals refer to LACORS as an essential resource for landlords to refer to when making this decision.

Understanding what types of alarms are required and where they should be installed may initially appear confusing. Current Building Regulations in England and Wales (Approved Document B) stipulate a Category LD3 detection system with alarms only in circulation spaces that form part of the escape route.

However, minimum standards in properties constructed in Scotland and Northern Ireland must meet Category LD2, requiring additional protection in rooms that present a high fire risk to occupants, such as the kitchen and living room. It is best practice for landlords to abide to Category LD2, regardless of where their rental property is located throughout the UK, as this offers tenants a greater level of protection.

Private landlords in England must abide by the 2015 (England) fire safety legislation, which requires a Category LD3 protection.

This requires at least one smoke detector on every storey of a rental property and a carbon monoxide alarm in any room that contains a solid
fuel burning appliance (for instance, a coal fire or wood burning stove). Failure to comply with these regulations not only puts tenants at risk, but is also prosecutable of up to a £5,000 fine.

With regards to private rental properties in Scotland, the Housing (Scotland) Act 2006 requires private landlords to install a higher level of protection throughout the property, ensuring Category LD2 requirements are met. This requires additional protection in rooms that present a high fire risk to occupants such as the kitchen and living room.

For private landlords in Northern Ireland, there are no specific fire safety legislations regarding private rental properties. However, under the Private Tenancies (NI) Order 2006, landlords must ensure their properties are “Safe and would not cause injury or death to occupants.” Landlords must also be able to prove “due diligence” in court, should a fire occur.

Fundamentally, fire safety in rented accommodation should be equivalent to that of a new build. It is therefore best practice to follow fire safety specified in the building regulations which is category LD2.

To provide overarching protection and prevention, anti-fire products suitable for both the accommodation and the tenant should also be installed. These include fire doors, fire blankets and extinguishers.

Once the appropriate alarm has been installed in the property, landlords are then under a legal responsibility to ensure the alarms comply with British Standards and are checked at the beginning of each tenancy to make sure they are working correctly. They should also make tenants aware of their own responsibility to check the alarm at least once a week, while also cleaning them every three months.

Although not a legal requirement, landlords should proactively communicate with their tenants, effectively sharing information that ensures their continued safety while living in their property. This includes educating them on what to do in the event of a fire, e.g. outlining all exit routes and assembly points, while also identifying the potential fire hazards present within the property.

Over half of accidental domestic fires are caused due to cooking, while 36 per cent are caused due to the misuse of electrical items. Landlords should install signs and instructions throughout the property in a range of languages that outlines all of this information.

Landlords should also consider implementing a smoking policy to reduce the potential risk of smoking related fires. Tenants should be made aware of the potential fire dangers smoking presents and could additionally install smoking points with safe cigarette disposal outside of the property.

James King is the sales director for FireAngel 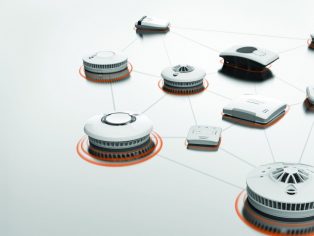