Demand for rented properties has bounced back 30 per cent in the two weeks to 14th April, after falling 57 per cent in the wake of coronavirus, according to Zoopla’s latest quarterly Rental Market Report.

Demand for rental properties fell by more than 55 per cent between 7th March and 30th March, while, in contrast, the sales market was hit by a 70 per cent decline in buyer demand, after the government effectively suspended transactions.

The additional flexibility in the lettings market, which has allowed agents to agree rental contracts with delayed start dates, and agree terms based on online viewings, means that activity has continued throughout the lockdown, albeit at a significantly lower rate.

Similarly, activity levels are likely to rise more quickly in the rental market than the sales market once the coronavirus lockdown eases, given that the average ‘time to let’ is less than three weeks in usual market conditions, compared to the three months average to complete a sale. Once lockdown restrictions ease, activity levels will likely rise and match previous years’ levels in the typically busier seasonal periods in Q3 and Q4, meaning that the total number of moves within the rental sector will be approximately 25 per cent lower than in 2019.

The total number of properties listed as available to rent remains broadly unchanged since the start of the lockdown, down three per cent since March 1st, indicating that there has been no large-scale withdrawal of listings. 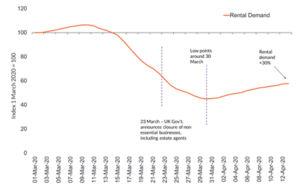 Uniform pick up in demand in last two weeks

The growth in demand has been uniform across the market both by region and price bands.

When examining which properties tenants are engaging with online, the data indicates across the country, excluding London, the £500-£600 pcm bracket is the most popular, consistent with trends seen before COVID-19 emerged.

By contrast, London has recorded a marginal shift in demand, with the largest proportion of interest focused on properties with rents of between £1,200 – £1,300 pcm in April, compared to February, when the greatest interest was in properties priced between £1,400 – £1,500 pcm. This could be partly attributed to a change in the financial circumstances of some tenants, but it is premature to conclude whether this trend will persist.

An underlying strength in rents

The Zoopla rental index shows that the annual rate of UK rental growth flattened in March – reflective of seasonal trends rather than ramifications of the coronavirus lockdown. Rents were up 2.4 per cent on the year, compared to 2.5 per cent annual growth in February and the 2.3 per cent recorded in December 2019.

Despite the slight slowdown in growth, rental growth has been on a largely upward trajectory since March 2017 amid increased demand and shrinking supply.

Rental growth in London, having risen strongly since March 2017, eased this month, with 1.7 per cent annual growth, down from 2.3 per cent in February. This may partially reflect a slight easing in demand given the post-election bounce in the sales market, and while a lack of supply and slower new investment has supported the uplift in rental growth over the last two years, a sustained delivery of new supply from new build schemes is likely to be adding to availability for renters and keeping rental growth in check.

“The flexibility of the rental market is one of the key factors which has allowed activity to bounce back more quickly than other parts of the property market. The rise in demand in the first two weeks in April indicates that some tenants are already mapping out their next move.

“As with the whole housing market however, activity levels and rental growth will likely be closely aligned to the economic landscape of the UK once the lockdown eases and the immediate impact of COVID-19 starts to recede.

“Rental growth has increased steadily for the last three years as demand has increased in the face of dwindling new supply. However, If the responses to COVID-19 contribute to a rise in unemployment, as some official bodies have forecast, this will reduce the scope for any additional growth in rents. We expect growth to moderate this year, but to remain in positive territory.”